And Suddenly it's Summer!

...and once again we are waiting to hear whether restrictions are to be lifted further next week or not. In the meantime the French Open is nearly over - which means Wimbledon cannot be far behind, and the garden is rather untidily full of flowers. 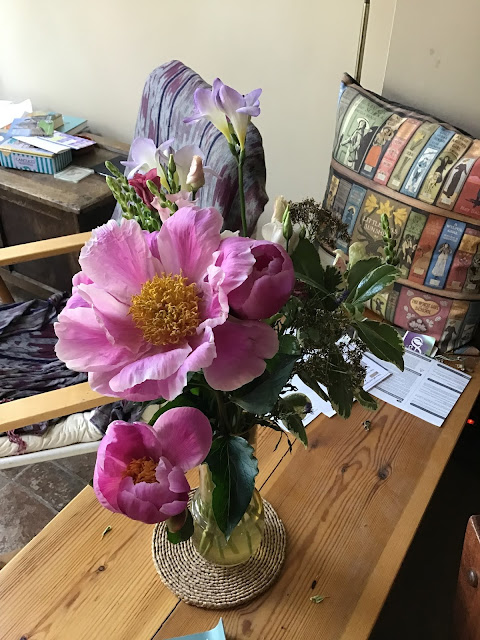 The peony in the picture above has been annoying me for some years, as it would bud, and then drop, so I said it could go. It must have heard, in the way these things do, because this year it had four big buds, once of which was in full flower when the scaffolding from our roof replacement came down...and knocked the stem a bit. It might have recovered, but I decided to cut the stem and add it to one of the vases of the latest delivery from Bloom and Wild. 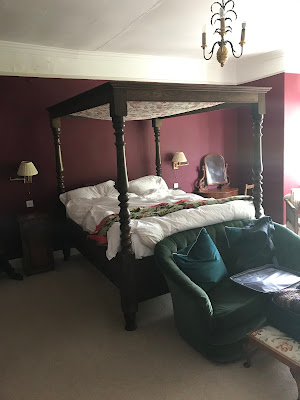 We are both fully vaccinated now, and have had a wonderful night away at the Castleman Hotel in Chettle, Dorset. This had changed hands since we were last able to get there - 2 years ago! - but the ambience and the food were still of exceptionally high standard, and it was such a treat for us not to have to think about preparing or clearing up a meal. The room we were given had a four-poster bed, which was a bit high. In fact anyone shorter than me would have needed a step to get in, and getting out (inevitably) in the middle of the night, was a bit haphazard, so next time we go, I think we'll ask for a different room. 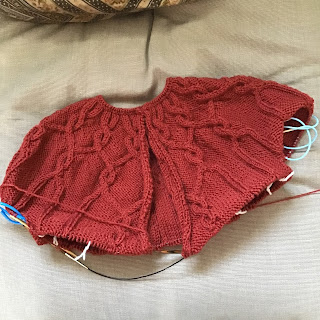 I am still knitting - a top-down rust-red cardigan at the moment, though also trying to finish a conventionally  structured black one while the days are bright, as it is impossible to see the stitches properly in winter or artificial light. A few days ago I had to drop down about 25 rows to correct (with a crochet hook) the two purls that should have been knits on the body of the garment! 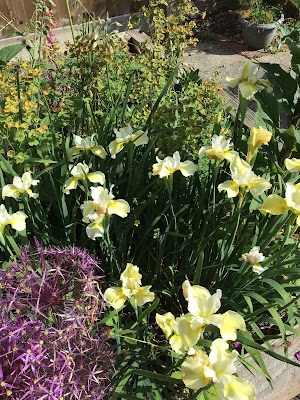 We also have a new dishwasher! Many years ago on here I recorded that I was unhappy with the first dishwasher we had, and thought the problem was the detergent. 10 years on, we have replaced it as it was just pumping and not draining properly, and find that the new one (which has the added benefit of popping open when it has finished) doesn't smell of detergent when it has completed the cycle. This makes us think that the old one had never drained/rinsed properly, and that we've been exposed to dishwasher detergent in our diet for all that time. It was the first one we had, how were we to know that it wasn't normal to get the detergent smell? 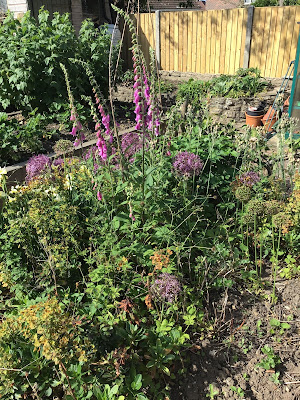 The garden is looking good, if a bit wild. The strawberries are ripening, the blackcurrants are setting...and the forecasters tell us that summer is here!

Waiting for news of 'the way out of Lockdown' - much of which seems to have already been briefed so as always will be an anticlimax. In the meantime the blanket is finished, and the snowdrops are out. 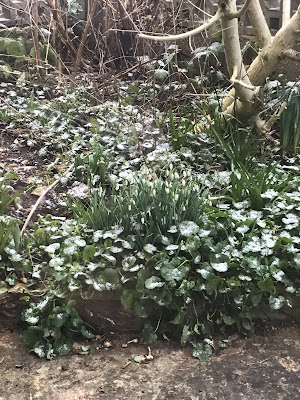 February's delivery of flowers from Bloom & Wild was particularly good, and also included 3 tulips (not pictured) still attached to their bulbs, so lasting beautifully and will go into the garden when they have died back. 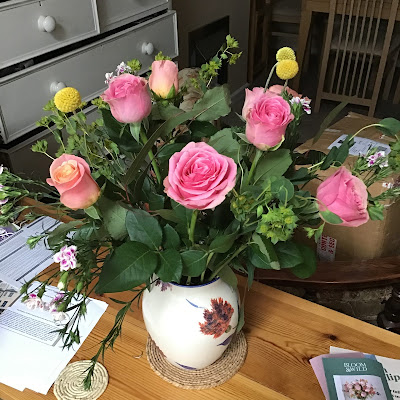 The apple and pear trees (only one of each) need pruning, so I must garner the energy to do that soon, before the sap really starts rising.

...oh, and we've both had the first dose of Pfizer now, and the dates for our 2nd appointments

Posted by Abbeybufo at 1:52 pm No comments: 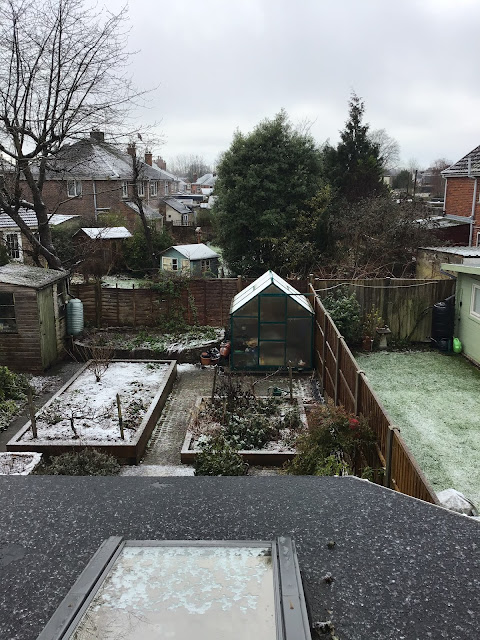 Not a lot has happened to blog about, but the sprinkling of snow we woke up to today has at least given me a new picture to post. It's good to be more than halfway through January, and seeing a few signs of spring. Mr Bufo has had his first Covid-19 injection, though I'm still waiting for mine, and I've done a bit more to the 'Fruit Garden' blanket - more than this, in fact, but I haven't taken any photos of progress since 10 Jan...!
There will be 8 of the oblongs so 2 on each side, 4 of the dianthus squares as shown, and 4 chrysanthemums, which I'm in the process of doing, at the corners.

Posted by Abbeybufo at 1:47 pm No comments: 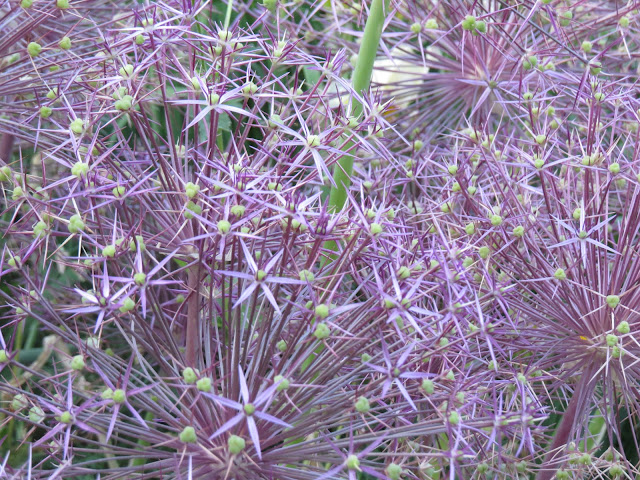 We had difficulty this year in keeping to our self-imposed rule of only using a photo we had taken in the current year for our Christmas card. But we decided the stars on this allium were suitable for the front, and then the inside picture is the central part of a blanket I am in the process of crocheting. Our chosen charity this year in lieu of sending commercial cards is Southampton Hospitals Charity, Intensive Care Unit. 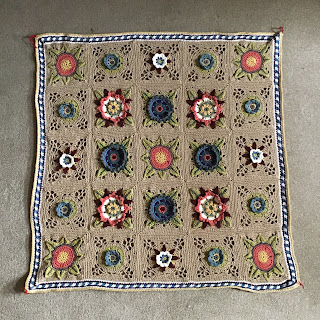 We wish all our friends the very best Christmas possible in this strange year, and hope that 2021 will be a better one for everybody.

Posted by Abbeybufo at 5:27 pm No comments:

At Last It's Where I Wanted It! 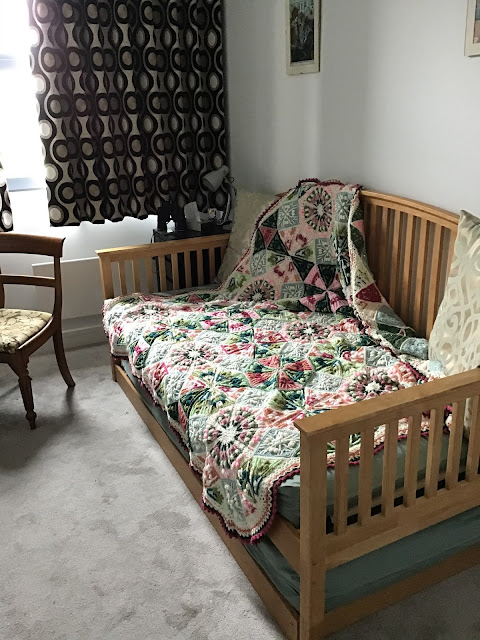 We made the first visit for a while to our flat in Poole, where I was finally able to get my blanket where I envisaged it from the beginning. We hadn't been down there since a flying visit in May to clear the fridge/freezer, once restrictions on how far we could drive were eased. We hadn't actually slept there since February! So as in February I was still making the squares that were the first part of the blanket, I hadn't been able to take even a part-finished blanket down to see that it would 'go' in the way I thought it would.
The main purpose of the stay was a sad one; my cousin's memorial service - she died in the spring, and the service was on what would have been her birthday. It was a beautiful day, and we'd met some other members of the family on Sunday afternoon in the park; beautiful weather then too.
The second lot of flowers of my annual subscription arrived yesterday - they were enough for 2 vases. 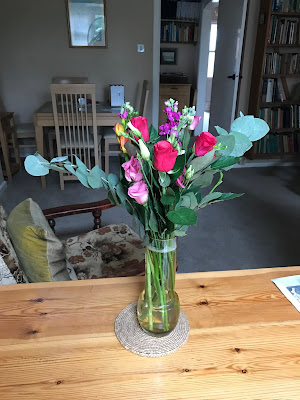 Posted by Abbeybufo at 2:46 pm No comments:

A Bit of Admin

Not sure how necessary this is, but hoping it will help with other blogs.

Posted by Abbeybufo at 9:46 am No comments:

What did you do in the Lockdown...? 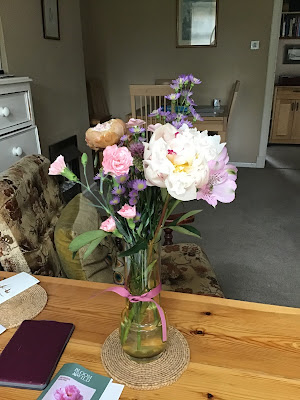 ...well in some respects, not a lot. I don't have an immaculately tidy house, a cleared loft, rows of homemade jams, jellies, etc. I haven't even made bread more than a couple of times! That was partly because I ran out of yeast, and partly because we found a baker that was delivering really good bread via our cheese man, who has also got together with a butcher, so we have been supplied with meat as well, when necessary, though our freezer was fairly full in March anyway.

And I treated myself to a subscription of flowers every month for three months - from Bloom and Wild - this was the first month's selection - over a week after they were delivered, and still going strong, though by this time I'd had to get rid of a few. I have the second delivery now, but haven't taken a picture yet.

I do have a fairly well-weeded garden, but that's only because Mr Bufo went out for at least a few minutes every day, and dealt with anything obvious, as well as marching round to try and compensate for the fact that having the paper delivered means the daily walk to fetch it wasn't happening. And the strawberries have been magnificent! 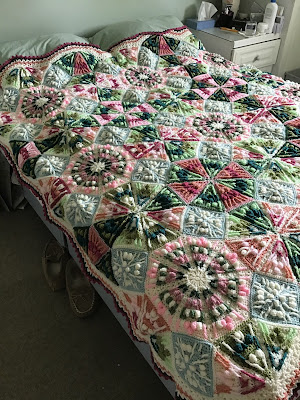 But in January I started to follow a 'Crochet-Along' some of the early parts of which I showed in the April blog. And in early July, I finished it! Some of it was hard going - I thought I was never coming to the end of the 36 squares that were part 1; but then there were lots of triangles - not all the same, admittedly, but about 180 by the end, and finally 9 octagons. We were able to join up some of the triangles into larger shapes along the way, and then the squares were added to the octagons, together with 'wedges' made of three triangles each, so there were nine large roundels that then fitted to the odd shapes we'd made earlier. And finally a border round the whole lot. So I haven't been entirely idle, either...


Returning to add photos of this month's flowers - 2 vases-worth 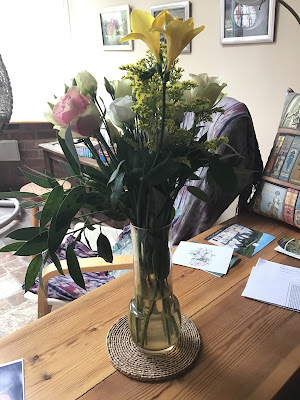 A Little Bit About Me

Abbeybufo
Romsey, Hampshire, United Kingdom
I am Abbeybufo in several places - mainly in the knitting site Ravelry, the CBB [Chalet Bulletin Board], its sister site the Sally Denny Library, and another Chalet-inspired site Lime Green Musings. That said, I am more an Abbey fan than a Chalet fan - having loved Elsie J Oxenham's books since the age of 10, hence the 'Abbey' part of my username. The 'bufo' part is from Bufo Books, the name of the book business my partner (known on here either as Mr Bufo, or TMH - see Dishwasher Blues) and I ran from 1981 to 2016. It was a great relief when the last of the old bookstock finally went to Hay-on-Wye, and we could reclaim the dining room for our personal books, and turn the garage into a utility room.